Building a Playground for the Community of Tomoroco

Building a Playground for the Community of Tomoroco 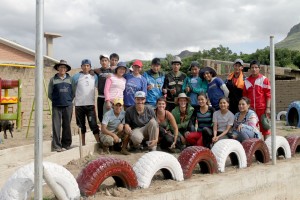 In the year 2013, former Volunteer Coordinator Zannah Pierce began plans for a playground in the town of Tomoroco in which Biblioworks established a library on the grounds of the community school in May of 2013.  This impoverished, rural community had no parks or community spaces and so we wanted to create a space in which children could express themselves through active play, where families could gather, and in order to make the library a more inviting place that meets the needs of the community.   It took months of fundraising, communication with architects, town officials, and consulting numerous sources surrounding health and safety to ensure that all activities on the playground were viable, secure, and would make a positive long-term impact on the community.

On the 30th of March through the 1st of April, after months of working with city-wide and municipal officials,  we were able to carry out the building of the playground in the village of Tomoroco!

It was a joint effort between 14 volunteers from Biblioworks and other organizations and 18 students from the school. It was difficult work digging with picks and shovels in the rocky soil, cutting through and drilling holes in recycled tires, sanding down wood, and making a pathway from stones, but it was a wonderful experience for everyone! We were able to complete the job in only two and a half days including painting!

The students were very excited and could barely wait until we had finished the construction to begin playing! The library was inaugurated with the attendance of the mayor, the town officials, and our director, Maritza Valdez, in a festive celebration featuring games for the children, cultural dances, and of course, all the children of the town trying out their new playground! 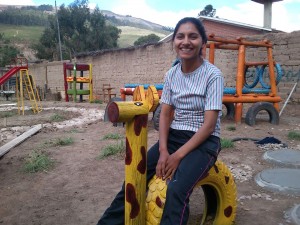 Roxana with the Giraffe! 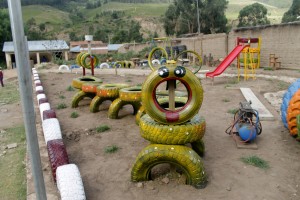