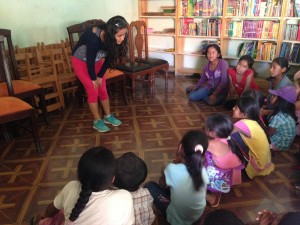 Last week, Roxana made the 6 hour bus trip to Villa Abecia to see how the library is coming along there and Silvia took a 3 hour bus trip to Presto to check in there. I had the pleasure of accompanying Silvia.

We left Sucre at 4 pm and took along 4 boxes of books that were purchased on behalf of the mayor’s office for the library. (The library in Presto is a municipal library.) We arrived in Presto around 7 pm, checked into our “alojamiento” (accommodation). Then we went back and made arrangements with Don Jaime, a member of the town council Silvia, knows to stash the boxes in a shop near the bus stop. 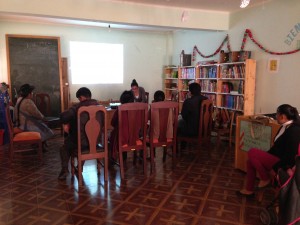 Some of these officials are in new roles so the purpose of the meeting was also to explain the partnership that was entered into with BiblioWorks when the library was set up. After the meeting we went to the secondary school to share the documents with the secondary principal who hadn’t been able to attend the meeting but who was appointed to the committee.

In the afternoon, we had been planning to visit the school library in Tomoroco for a similar meeting but we had transportation issues so that meeting had to be canceled. Instead we spent some more time in the Presto library which is located just off the main plaza and speaking to officials.  One of the items included in the plans of the library committee is to have a sign made for the library. 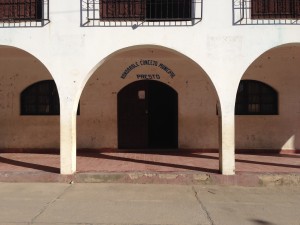 The next morning, we met with some officials at the Alcadía (town hall) and then spent some time at the primary and secondary schools visiting each class to promote the library. 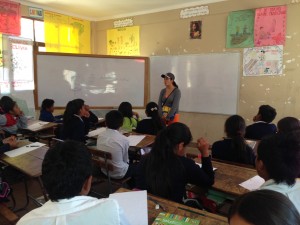 Many of the students were enthusiastic about the library and most knew where it was. The secondary students were most excited to hear that the library hours would be changing (opening and closing two hours later which means it will stay open until 8 pm) to allow them to visit the library to do homework and study. The current hours meant the library closed soon after the end of their school day.

Silvia led that afternoon’s book club for children at the library. Many, many children showed up at the library. Silvia told a story about a rabbit who didn’t take care of her golden teeth that had a strong message a dental hygiene (very important in this country where children eat sweets from morning to night!) and then passed out a worksheet that covered the guidelines for tooth brushing. Some children completed the sheet and many stayed in the library to do puzzles and look at books.

We finished up, made a quick trip back to the alcadía to get another signature on a document and then picked up our things at the alojamiento and headed for our bus. The bus back was smaller and the trip was about 30 shorter than on the way there.

All in all it was an interesting opportunity to see a small town in Bolivia, to see Silvia in action, to visit one of our libraries and local schools, to marvel at the number of dogs, pigs and donkeys wandering through town and to sample local cuisine.

I look forward to more such trips!