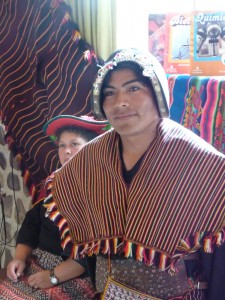 Faustino is the librarian of the library in Tarabuco

Sopachuy is a peaceful village with two gorgeous rivers, nestled between beautiful, green and towering mountains. There are approximately 1,100 people who live in the tiny hamlet of Sopachuy, mainly making their living as farmers, cultivating corn, potatoes and ají (a kind of green chili). Sopachuy has a humid-hot climate, a nice break from the arid frigidness of Sucre. The name of the town comes from the Quechua Supay meaning devil or god of the underworld and Churu meaning island. It is not an island, but it is nestled magnificently between two rivers and it is not possessed by the devil but was site of a bloody battle between the Inka Empire and the Spanish conquistadores. Sopachuy is a grueling seven hour bus ride away from the city of Sucre, making it the farthest town from Sucre where BiblioWorks has a library.

As I have mentioned in previous posts, the library San Pablo in Sopachuy is one of our best libraries and it is always nice to travel to Sopachuy to see the numerous children and teen-agers that go there to read daily. The librarian is dedicated to making the library better with daily activities to promote literacy and reading habits. She loves her job and every time I enter the library she is reading to children or recommending good books for them to read. The library committee is another reason why the library in Sopachuy functions so well and is a community establishment. The library committee is made up of teachers, elected officials from the mayor’s office, the director of the local co-op and the district superintendent of education. Their job is voluntary and they need to make sure that there is a working relationship between the library, the community, the schools and the elected officials and leaders. They organize book fairs, bake sales and other events to promote the library in the community and at the same time raise a little money to buy new books and materials for the library. Last year the president of the library committee, the district superintendent of education asked BiblioWorks if we would be willing to bring all of our librarians and committee members out to Sopachuy for a multi-day workshop.

The previous month of March, we were finally able to fulfill their request. The BiblioWorks team, along with librarians and committee members from eight libraries in the Chuquisaca department spent two days planning ways to promote literacy and attract more users to the libraries. We organized round-table discussions, group work, planning activities, games and other fun stuff to create an environment in which librarians and library committee members could share their experiences, frustrations and dreams in their own library in order to learn from the other libraries.  One activity we did in groups of five people was a story creation project. Bolivians are normally very timid and reserved, but after everyone created their stories in groups, the entire group of thirty participants was rolling on the floor laughing. All in all the workshop was a huge success and it allowed us as an organization to forge real life relationships with people who are involved in the education of the towns where we are working, in order to improve the services that the libraries offer.

As we were all wearily traveling back to the city of Sucre, it was cold and raining. Our bus was stopped by a mud-slide and we were stuck for several hours. However, it wasn’t as terrible as it might sound. It gave us all another chance to get to know each other, to play road trip games, to laugh and know that BiblioWorks has a great team of people dedicated to literacy, library promotion and giving the children of Bolivia much needed educational opportunities that they deserve! 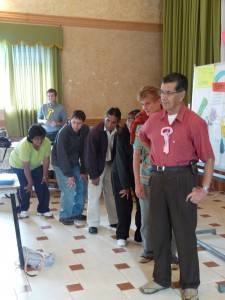 Some participants have fun at the workshop